I’m here today with two brief word-related tags: The Text Tag from Savannah @ Scattered Scribblings, and The Quote Tag from Mary @ Sunshine and Scribblings (all the scribblings! I love it. ❤ )! Thanks so much to both of you! ^_^ They both have absolutely lovely blogs that make me smile and laugh, so check ’em out, do!

1. What is your favorite letter of the alphabet?

Maybe V? I’m also fond of T, if the beginning letter of most of my awesome characters is anything to go by… *cough*

2. What are three words you love?

Enigmatic, adamant, & grey (with an e; none of that American-spelling-with-an-a nonsense. ;)).

3. What are three words you hate?

Whoa, hate is a strong word. How about I hate the word “hate.” XD And also, erm, dislike shall we say… the words “humidity” and “procrastination” because of associations. 😉

Oh, I create words all the time. XD One I made recently is Authorialdom, as in “That takes real authorialdom” — probably “the state of being a skilled writer” or some such. *nods*

5. What are your three favorite punctuation marks?

Well, those are favorites in that sense, but I’m also very fond of “quote-marks” and exclamation marks! And semi-colons; because they’re lovely and/or useful. *nods* And let’s not forget commas, and periods either. Can’t have them feeling left out. And question marks and colons: how can we leave them out? Now that is the question. I just love all punctuation marks, I guess. ^_^ *goes to look at Eats, Shoots & Leaves again to remember there are kindred souls out there*

6. What are your three favorite fonts?

Hmm. That’s tough. Well, here are at least three of my favorites:

(Apologies for the squiggly red lines; my spell-checker is under the erroneous assumption that my name is not a word. Ahem.)

7. Savannah’s Question: What is one word you are constantly misspelling?

Received. I literally spelled it wrong when I went to type it… I know that it’s “I before E except after C” but my fingers just want to say I-E. It’s bad. 😛 Most words I’m pretty good about though. *nods* It comes with being a perfectionist of the wordish variety that I am.

I’m going to disobey this one slightly and instead of posting a quote three days in a row, I will just post 3 quotes right now. 😉 And I nominate anyone who wants to do it and hasn’t yet.

(The quote graphics were designed by me using Canva.com.) 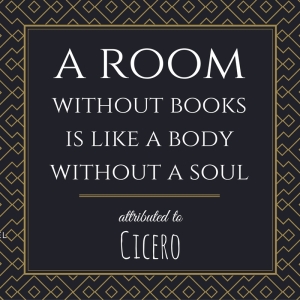 “A room without books is like a body without a soul.”

“All we have to decide is what to do with the time that is given us.”

— J.R.R. Tolkien (from The Fellowship of the Ring)

Well! Wasn’t that a delightful wordish-exercise? ^_^ Do you have a favorite quote/word/letter/punctuation mark? Let me know in the comments!

And consider yourself tagged for both or either if you wish to do it!

A new year. It’s not all that strange — it’s happened time and time again, after all. I mean, the calendar flipped, and it’s going to take me all year to remember to write 2015 instead of 2014… but that’s about all, right?

So it’s odd that I have a feeling about this year, and did as soon as it arrived… and it’s still lingering.

I can’t explain it.

I think it’s a different color, but what color it is, I do not know. Perhaps I shall learn by the end of the year.

(And yes, this is just the sort of odd thing that goes through my head sometimes. It probably makes no sense to sane mortals. What can I say. I’m an odd whimsical dreamer and weaver of tales, willingly trapped in the land of Faerie… and all that entails.)

On to the more normal part of this post…

So it’s January 3rd… Most people seem to have already done their looking back at 2014, and making resolutions, goals, and what-have-you for this shiny bright new year that is 2015.

In the past, I’ve made copious resolutions because I like lists and things, and making goals at the beginning of the year is a tidy thing to do. And I’m all for tidiness.

But this year I decided I wasn’t going to. I’m a perfectionist, which means that as soon as I even half-fail (or perceive it as failing) a goal, I grow despondent and give up on it… because a goal must be finished PERFECTLY, or what’s the use of doing it at all? I know this isn’t the way to look at things, but it happens more than it should.

I wasn’t going to do resolutionish things this year, so that I would not have to deal with the sadness of failing.

But I changed my mind just now. Most people are done with theirs, but I’m going to jump in now, not with straightforward goals, or really resolutions… because I don’t know how I’ll gauge if I’ve succeeded or not.

But I’m going to take two words for 2015 and hold onto them and try to become their friend this year.

That may sound silly, but I sometimes get overwhelmed with things, even just little things, and find it hard to find good things around me, or in myself. I’m going to try to be less pessimistic. (Like something funny I saw on a mug today: Pessimists Unite For a Better Tomorrow! Heehee.)

Positive is a word I need to try for a little more in my life.

Which is hard to track. But like Positive is to counter my tendency toward downinthedumpsishness, so Productive is meant to defeat that other infamous P word, so known and feared by writers and people everywhere: Procrastination. (But picking “Productive” sounded better than “Procrastination — NOT”.) I put so many things off, for a million and one different reasons, and don’t do them in the NOW.

What I need to realize, is that NOW is always. Tomorrow never comes. If I don’t do a thing TODAY, how will it happen? (Don’t answer that. XD)

This may go against my first word, since if I’m NOT Productive I’m likely to feel depressed about it, even if it’s only me perceiving it as being unproductive, because of my perfectionism.

But we can only begin by trying.

(And I’m not going to put Perfectionism either on my list of Problems or Pros… It’s something between both and I just have to work with it, somehow.)

Best of wishes to y’all — I hope your own 2015 will be full of the words and their meanings that YOU need most!

Oh, and while I’m posting today (it being January 3rd), it would be vaguely wrong not to mention the birthday of my favorite author (as I posted on last year).

So a happy birthday to J. R. R. Tolkien!

Why don’t you do something Tolkienish to celebrate? 🙂 (As for me, I’ve started rereading The Hobbit today. And am getting back to listening to The Tolkien Professor’s brilliant lectures on Tolkinish things. And possibly going to see The Battle of the Five Armies again tonight.)

And it appears my unofficial word for 2015, judging from this post, is Ish.

May there be much happy Ishness for all!

Blessings for the New Year,

I realized I hadn't posted this book since getting the stunning paperback and these delicious character cards so of course I had to remedy this!
Happy longest day of the year! It's the Summer Solstice: first day of summer these days, traditionally Midsummer Day. Either way, it seemed an appropriate time to post this charming book! 😍
Do you like . . . Redemption Arcs?
Aaahhh! Look at this cover! 😍😍😍🔥 (Swipe for a closer look!)
This Diana Wynne Jones book features goats and an elephant, and since I didn't have an elephant... 😂
May #Bookhaul! I found a lot of sales, and secondhand books at thriftshops, and traded some books in too, so I got a ton of books in May and my bookshelves are displeased with me. 😂
May wrapup! (Swipe for audiobooks!)
Tonya thinks the book she was named after -- Winter Spell by @cmbanschbach -- is pretty cool. ❄ (Tastes good, too, apparently. 😂)
A belated April reading wrapup, since I went on semi-hiatus in May and never got around to posting about my April reading!