Well, I’m running short of time to finish Camp NaNo and there are many words to write yet. But during one of my writing breaks, I thought I’d keep up my Monday-posting streak!

So, for your listening pleasure, here are some of the songs and melodies I’ve been listening to for inspiration as I type away at my Camp stories.

I’m not sure entirely why it’s the theme-song for it, but I got the CD it’s on for my birthday, which was around when I was doing a lot of the brainstorming for this story, and it sounded similar to a lot of the music I used when writing the first book, “The Owl of Kedran’s Wood”, so it sort of twined itself to the story and now it just is part of it. Also it seems to sound a little wintry; but that might just be me. I’m listening to that one all the time — it’s so inspirational to my story.

After that, in no particular order:

Gaelic Morn
A friend linked this to me years ago as good instrumental inspirational music for writing, and I’ve continually gone back to hear it over and over since then — it may be the thing I play most on Youtube. Heartrendingly beautiful. ❤ (Okay, so the picture’s weird. But I got over it. ;))

Let it Go – “Frozen”
Let’s face it — this is here because it’s constantly stuck in my head, so I have to go watch it… 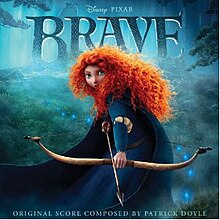 Touch the Sky – “Brave” soundtrack
This is just so awesome! I love it.

Noble Maiden Fair – “Brave” soundtrack
This has to be one of the most beautiful things ever!

Cover of The Lord of the Rings themes by The Piano Guys
This. This is the best. I discovered it during NaNo last November and have never tired of it. It’s amazing to watch.

And there you have it, a few of the songs and tunes that have been jangling away in my head as I write! Hope you enjoyed!

Do you listen to music when you write?

Welp, back to the Campgrounds. 😉