Today I’m spreading the word about my friend E. Kaiser Writes’s book-launch party! Read on for info on the books, a Facebook Party, and a giveaway. 🙂

What’s the occasion? I’m glad you asked! At long last her available novels — previously available only in ebook editions — are releasing in print today, which is super exciting! 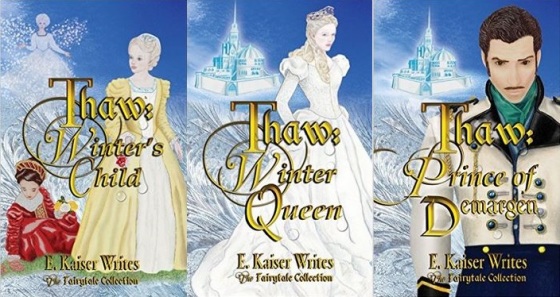 You may remember I posted about the launch of the first three THAW books: Winter’s Child, Winter Queen, and Prince of Demargen. (You can also read my review for Prince of Demargen on my other blog — hint: I LOVED IT!) Well they’re in print now! (And they’re all gorgeously illustrated by the author.)

EEEK I love seeing them in “real” form here… So pretty!

Today also marks the launch of the new ebook editions (also available in print) of the first two books of the Five Gems series, Jeweler’s Apprentice and Traitor’s Knife with new covers — aren’t they pretty? 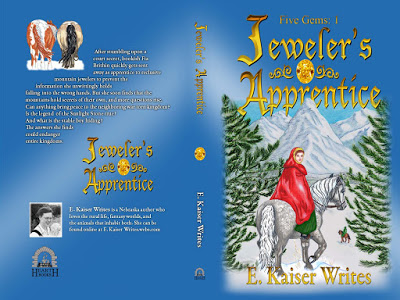 The Books, With Links

On her first visit to the palace 16 year old Fia Brithin stumbles onto a court secret. To keep the secret safe, the Chancellor sends her off as apprentice to a famous, reclusive, high mountain jeweler.

…And straight into adventure.

Discovering gems with deep secrets and new friends with the same, Fia learns a whole lot more than just making wax models.  She learns… When to trust a stranger, and when not to; why not to try stealing from gem thieves; what heroism is, what royalty ought to be, and that the mountains themselves can sometimes be the greatest danger of all.

When the loyalist cause enlists the mountain house into a weaponry, young apprentice Fia is confronted with three refugee children, a disturbingly upstart former messenger, and accidents happening everywhere. Are saboteurs out to nix the weapons works… or is it her friend, Othira’s incognito crown prince they’re after?

Traitor’s Knife continues where Jeweler’s Apprentice ended, and nearly seventeen year old Fia Brithin from the foothills still has a lot to learn about the mountains, and the people now in them.

A barren king and queen pray for a child, and when in their loneliness, they make one out of snow, their prayers are answered in a special, and unusual way.

Sometimes, when we get what we wish for, we don’t know what to do with it.

A slightly pampered girl allows her avoidance behavior to isolate her from the world… it’s only when she takes the final step that she realizes the wall she’s built in the name of safety is also the one that will hold her prisoner forever… unless she discovers how to destroy it.

The only one who can break a neurosis… is the one who has it.

The whole world knows his guilt, and is absolutely correct about it, but how far can a man go to regain respect so swiftly lost?

Or is an honorable death the best a fallen star can hope for?

The only person who can help him… is the one he most deeply wronged.

E. Kaiser Writes credits her nearly nomadic childhood for the vast reach of her fictional worlds; she has lived (and gotten to known the locals) in the Rocky Mtns, the Smoky Mtns, the plains, the deep forest, the searing Texas summer and frozen Minnesota north. She wears many hats: writer and editor of ad copy, web copy, office correspondence & fiction; a cowgirl, animal trainer, seamstress, jeweler, artist and… authoress! Connect with her online:

There’s a Facebook party tomorrow (Saturday, April 23, at 1:00 – 4:45 pm CST) to celebrate the release of these books, so if you are on FB be sure to mosey on over there to join the fun! There’ll be giveaways and fun stuff, including other authors like Rachel Rossano, Kelsey Bryant, and Faith Blum, joining in the celebrations. 🙂

If, like me, you are not on Facebook, fear not! The author is kindly also holding an extra giveaway, winner(s) to be selected from those who comment on this and other posts about the launch this weekend! Check out her blog to learn more about what-all’s going on. 🙂