This is the obligatory new-year post but it’s a little different because it’s not all goals and accomplishments and resolutions. (Though there’s some of that.)

New Year calls and I’m terribly tempted to pretend like Bilbo that I’m not at home. XD *cough*

We’re already 2 weeks into 2019 and I haven’t figured out all my writing goals yet and . . . I feel a little stressed about that. The pressure is on when the new year hits to figure out All The Things and set goals etc. And I simply haven’t. (Particularly for my writing, which is slightly awkward because this is a writing-ish blog.)

But you know what? It’s okay.

I don’t have to know all the things I want to do this year RIGHT NOW. I do know the next thing I want to do, and that should be enough for this moment.

(*shoos list-aholic self to sit somewhere in the back row instead of booing in the front one* Ahem. >.>)

I’m sitting here wondering why I’m so stressed and thinking how I should let it go . . . and I just glanced at the writing journal I finished minutes before midnight brought in the New Year and it made me pause and reflect, because I’d totally forgotten about it.

Here’s an excerpt of my quietly-excited New Year’s Eve self, inking dreams for the future:

“. . . that the windings of the road of this writer will bring me to wondrous places and tales of the fantastic and of the heart. I don’t know for sure my goals for 2019. But I hope to meet it with a deep breath and a soul ready for the wild adventure of this road that calls me onward to new horizons of pen and paper and imagination — and the love of worlds to touch our souls and show us the stars. Whatever goals and dreams await, onward — let’s rise to meet them with the dawn beyond the horizon. The stars and the sky of imagination await! Happy New Year and may 2019 be filled with words of wonder!”

As I’ve been stressing out these last few days, I’d totally forgotten I wrote that — I suppose that enchanted hour before the turn of the year was closed in the final pages of the book that was 2018 and I forgot to open it and look at it again until just now.

Granted, it’s a little dramatic (I don’t always write like that in my journals, I promise. XD), and may be harking back to my steampunk WIP world, but it’s the feeling that remains.

That girl sitting in the light of the Christmas tree scribbling her soul down before the new year arrived . . . I want to be her. She was so excited and full of hope, and even though the future was strange and she only had a faint idea of what might come next, she was ready to embrace it and make it beautiful to the best of her abilities.

She wrote those words and then went out and stood in the cold under the stars, and watched fireworks ring in the New Year and talked and laughed, and saw a falling star, and the night was full of magic.

So I don’t know my goals. And that’s all right. I have vague inklings of possibilities and I’ll hopefully pick some of them and goal-ify them at some point . . . but here are a few.

So you see, I have plenty of options. I just don’t know, after this one goal (last 2 chapters of KW2), which option is going to pick me. (Because sometimes it feels that way instead of the other way around . . .)

It’s all very well to pretend you’re not home when the Sackville-Bagginses come calling, but who knows if 2019 might not be, instead, a whole bunch of dwarves and a wizard, waiting to take us on an adventure? We might miss out. So I think I’ll answer that door anyhow, even if I don’t know my dreams and goals yet. 😉

Speaking of dreams and goals, here’s a quick run-down of accomplishments of the last year, from my 2018 dreams post, since I’m curious how I did with them!

Dreams from 2018 that came true

Well! I’m pretty happy with how many of those dreams I managed to track down and haul into becoming a reality! 🙂

A few other highlights:

Other writing stuff that happened:

Whew! I had no idea so much awesomeness happened. I’m very glad I decided to write this post after all and found out. XD

I’m going to call 2018 an EXCELLENT year in the writing department, and look forward to the new year.

*tastes how it sounds*

Let’s make it a good one, shall we? 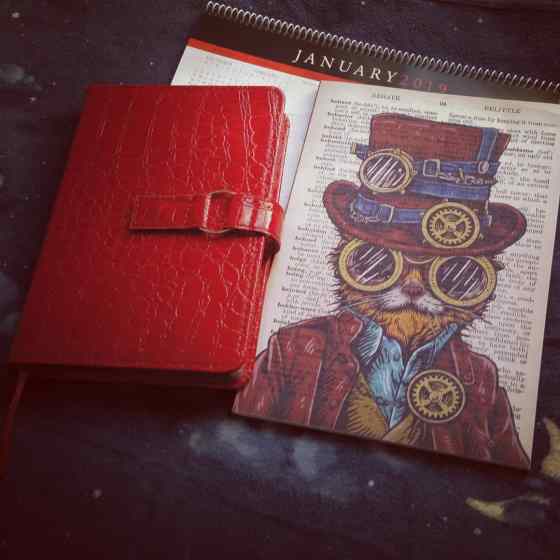 I’ll leave you with my new bullet journal (bjournal, as I Nordic-ly call it) and my new writing journal — a fabulous steampunk cat!