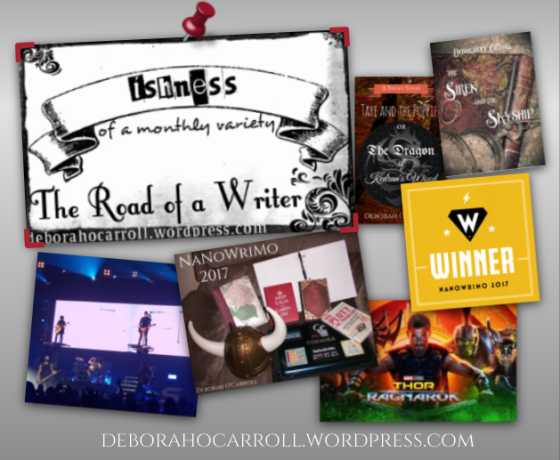 This means that a) we survived NaNo (whaaat?), b) I’m no longer trying to write large amounts of words daily, and c) it’s time for an Ishness wrapup of my 2017 NaNoWriMo!

And, y’know, other things that happened in October and November. 🙂

This is mostly about November, but I’ll touch briefly on October (SO long ago; my goodness, was that even a thing?), to say that I was mostly busy prepping for NaNo, that I caught a cold at the last minute so that I was useless in my NaNo-prep the week before November hit (yay. XD) and that I got to see the band Skillet in concert AND IT WAS THE MOST AMAZING THING. 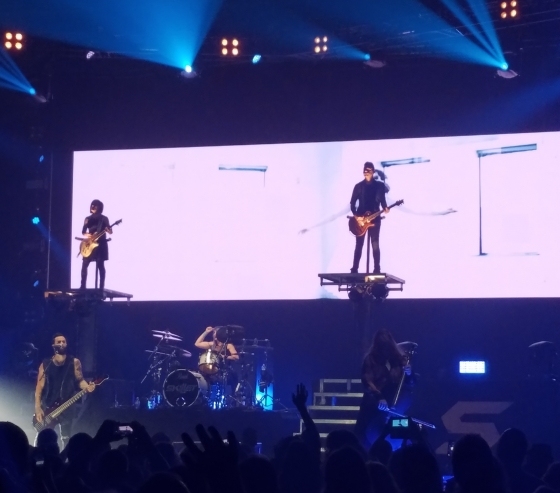 (image courtesy of my brother’s phone…)

Colton Dixon (who’s also a great singer whose music I love!) and a couple others were there, which was fun as well! But but SKILLET. They’re one of my favorites, and I especially usually listen to them a lot around this time of year — their fast and inspiring music is so helpful when I’m typing fast on wordwars during NaNo… 😉 Anyway, I love their music and they also seem like such FUN people, so seeing them live on a stage with their amazing music and amusingness and just — IT WAS INCREDIBLE. They’re so epic and NICE and faith-filled and funny and I just love them. 🙂 I had an absolute blast, and the whole concert (them and the other artists) was amazing, and I came away so inspired and filled up and happy. 🙂 (I did wear earplugs in my ears the whole time because rock concerts are LOUD; I was still able to hear everything despite that just fiiiine, and consequently still have my hearing. XD) Christian Rock may not be everyone’s favorite, but I absolutely love Skillet and this was definitely the highlight of my October. 🙂 🙂

I read a handful of books in the last two months…

(in reverse chronological order, from a screenshot of my Goodreads Reading Challenge, because I’m lazy)

For my thoughts on them, see the Bookish Post I posted on my book blog a few days ago! 🙂

In Other Book News: New Genre!

Also, the previously un-named genre which we all needed a name for (the kind that’s basically in another world but isn’t TECHNICALLY fantasy because there’s nothing fantastical, and is more like historical fiction but without needing to be historically accurate) was finally named: Kingdom Adventure! So if you read/write this, be aware! This is an exciting development. XD

Who has time to watch things this time of year?? Ahem. I sneaked in a few in the last couple months, though.

(I just realized I over-use the word “fun” in my discussion of movies I watched. But why would anyone watch ones that weren’t??)

Highlights of My November 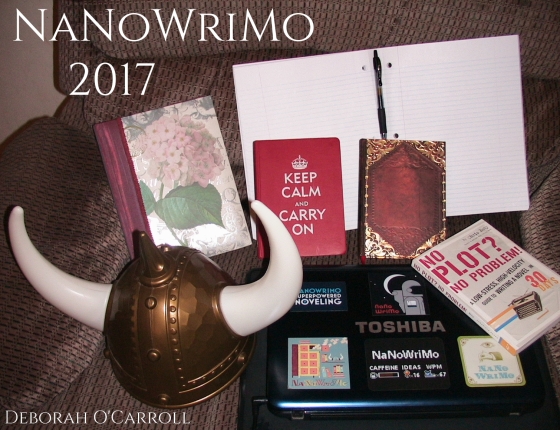 Since this is a writing blog, I feel like I should mention that in addition to writing 50K words and learning a lot through that, I also absorbed some writing advice from a knowledgeable author at a write-in, and from a brief creative writing class I attended one day, and read a writing book (No Plot? No Problem! by Chris Baty, who founded NaNo), so I feel all steeped in writerliness. ^_^

I wrote a 6000 word short story called The Dragon of Kedran’s Wood (or) Tare and the Puppies — which I will share on the blog once I edit it!

And I started my YA Steampunk-Fantasy novel The Siren and the Skyship and wrote 44,000 words of that.

I unfortunately had only done a small amount of plotting in October, so I was not as prepared for writing as I would have liked, which necessitated some hasty plotting partway into November. I feel like I did a lot closer to pantsing than usual. (This year and last year both…) So with that on top of how BUSY I was most days, I sometimes struggled to reach the daily goal. I have no clue how people with full time jobs/school manage to do this — I salute you all. O_O

It was a bit of a challenge to make it to the minimum each day, but I stayed on track except for two days early on. I was DETERMINED to stay on track and I did! 😀 (I fell behind when I was visiting awesome author friends, but I don’t even mind because it was so fabulous. ;)) Sometimes I got ahead and used that to take a break and relax and this was SUCH a good idea. I don’t do really well writing every day for long stretches. It worked out this year that I usually wrote four days and then took one off? Like, multiple times? I didn’t even plan that, it just… happened. O_O Because I love analyzing stats and noticed and I love it. XD 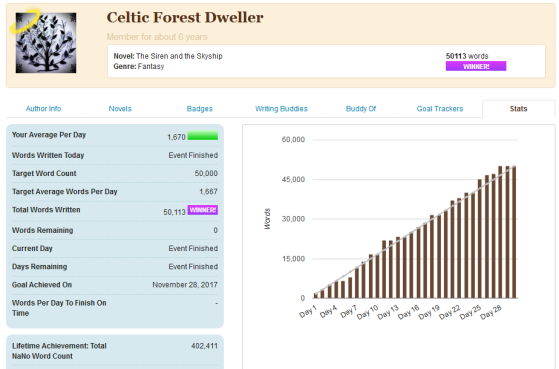 Also, I’ve now written 400K words in 8 years of NaNos and EXCUSE ME WHILE I FLAIL OVER THIS FACT. :O

The novel itself is horribly messy and only half done (if that) and I ran out of plot EXACTLY at the end of the month, so I need to plan the rest of it and finish it sometime, but other than that I’m fairly pleased with how it went. 🙂 I really like the world and characters, and while the Little Mermaid part doesn’t seem to be showing itself as much as it could, the story itself is coming along. SKYSHIPS. ❤ Because I love nautical-ish things, and this is the perfect mix of 18th century ships, modern navy ships, and spaceships… just… better. 😀 And even though they’re frustrating at times, I do love my characters. 😉 *hugs Rook and Tasmania and Auren*

ANYWAY. It’s a mess but I survived and made it this far, and I don’t know how I feel about the whole story, but I was particularly enjoying it later in the month.

And of course I wrote a whole short story first, about my precious Tare-and-the-Chess-Club, which was SO fun. I can’t wait to share it with y’all! ❤

And I stayed on track nearly all month and finished early on the 28th.

NaNo was exhausting and confusing and busy, and it’s honestly a miracle I managed it with all the insane running around and lack of plotting, but ultimately I had a mostly really good one and I’m so happy to have made it through to the end with another 50K under my belt! 🙂

So, what am I going to be doing this month?

…Okay, so you probably know me well enough to know that I probably won’t do neeearly enough of that. But I have SO MANY plans about reading/reviewing/blogging/etc. since I feel like I’ve hardly done any of that for a couple of months due to WRITING STUFF (which was lovely but it will be nice to have a break). So hopefully some of that will happen on top of Christmas busyness and said other plans. I’m ready to chill a little… Doesn’t mean it will happen, but I’m ready for it. XD

I think that’s it?

WHEW. *collapses* There you are. I hope you enjoyed this little peek at my NaNo and life! Thank you so much for reading! And let me know in the comments how your NaNo (or November. ;)) went! ^_^

24 thoughts on “NaNo Ishness 2017! (My Insane 8th NaNoWriMo, Skillet, and Other Epicness)”