Melanie Dickerson does it again! Another extremely enjoyable novel from a talented author. 🙂

I always enjoy Melanie Dickerson’s fairytale novels, and this one was especially enjoyable for some reason! 🙂 It’s the final book in the trilogy which began with The Huntress of Thornbeck Forest and The Beautiful Pretender, and it tells the story of Magdalen, the friend of the heroine in The Beautiful Pretender, which I was very excited about. However, each of the books stands alone (aside from a few references/characters who reappear, which isn’t so important), so if you haven’t read the first two, you can definitely jump in on this one! 🙂

The Noble Servant is a retelling of The Goose Girl (with nods to The Prince and the Pauper as well), which is not a fairytale I’m as familiar with as some, although I know the general idea of the servant taking the place of her lady and forcing the heroine to become a servant tending to geese. I enjoyed the retelling aspect but likely didn’t pick up on as much of it as I might have if it was a different fairytale. But far from making it less enjoyable because of that, I actually enjoyed it immensely because I had no idea what was going to happen!

I really liked our heroine, Lady Magdalen of Mallin, who was very sweet but capable; and I especially liked the hero, Steffan, Duke of Wolfburg, who was kind but heroic and noble, and had some great lines. They are both nobles who find themselves in servant roles outside Steffan’s castle, and there is a plot by Steffan’s uncle and all sorts of intriguing things. I loved how they both ended up servants for awhile, which was interesting to read about. My favorite thing about the story was probably Magdalen and Steffan. They were super cute together, too. 😉 I loved their dialog! Some of their discussions and times with the sheep and geese were my favorite parts of the novel. ^_^

I especially loved how Steffan really disliked the geese. XD You have a Goose Girl retelling, and the hero doesn’t like the geese the heroine is around because he’s scared of them. It. was. the. best. XD Steffan’s comments about the birds were my favorite. 😀

As always, I enjoyed the medieval German setting (Steffan had even been away studying in Prague! I loved that!), with the smattering of German words, and the castle and the woods and fields, and even a sight of the sea. It was overall lovely and a great setting and time-period. Also, I want to eat those stuffed rolls with bacon, potato, and sauerkraut in them—they made me so hungry. XD

It was exciting at times, and absorbing all throughout, and had a few surprise twists which I did not see coming! Especially with a few of the side characters surprising me. So that was neat. 🙂 Something about it felt a little different than Melanie Dickerson’s previous books, I felt, but not in a bad way. It was just… kind of new. 🙂 While still being slightly similar in a good and familiar way.

Like I said, I wasn’t ever sure what would happen next, and the writing was extremely well done, and kept me turning pages all throughout the book, eager to find out how our sweet heroine and dashing hero would get out of their predicaments, with God’s help, and maybe find a little love along the way. 😉 I couldn’t stop reading and was captivated until the final page.

I can’t think of anything specific that I disliked. Occasionally it gets very slightly exasperating how long it takes the hero and heroine to actually let on that they like each other and get over their worries about not being worthy etc., but that seems to be a classic romance theme, so oh well. 😛 And it didn’t annoy me as much as sometimes.

Overall, it was a very enjoyable story, which I quite liked. ^_^ I’d say that young adults and adults alike would enjoy this charming, sweet romance in medieval Germany, with a dash of retellings and Christianity, mistaken identities, lovable characters, and fun dialog about geese. 😀

I received this book free from the publisher through the BookLook Bloggers book review bloggers program. I was not required to write a positive review. The opinions I have expressed are my own.

“Evil birds. What are they doing among my sheep?” He raised his arms. “Shoo, you cruel little beasties.”

About The Noble Servant 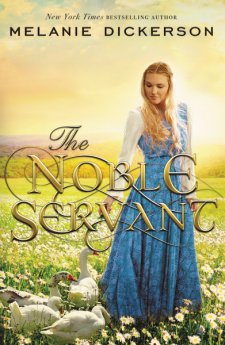 She lost everything to the scheme of an evil servant.

But she might just gain what she’s always wanted . . .

if she makes it in time.

The impossible was happening. She, Magdalen of Mallin, was to marry the Duke of Wolfberg. Magdalen had dreamed about receiving a proposal ever since she met the duke two years ago. Such a marriage was the only way she could save her people from starvation. But why would a handsome, wealthy duke want to marry her, a poor baron’s daughter? It seemed too good to be true.

On the journey to Wolfberg Castle, Magdalen’s servant forces her to trade places and become her servant, threatening not only Magdalen’s life, but the lives of those she holds dear. Stripped of her identity and title in Wolfberg, where no one knows her, Magdalen is sentenced to tend geese while she watches her former handmaiden gain all Magdalen had ever dreamed of.

When a handsome shepherd befriends her, Magdalen begins to suspect he carries secrets of his own. Together, Magdalen and the shepherd uncover a sinister plot against Wolfberg and the duke. But with no resources, will they be able to find the answers, the hiding places, and the forces they need in time to save both Mallin and Wolfberg?

Published by Thomas Nelson Publishers, May 9, 2017

11 thoughts on “The Noble Servant by Melanie Dickerson (Review)”

I’m so excited to share TWO cover reveals with you guys today! So excited for both of these! COVER REVEAL #1 Firstly, we have a futuristic London buddy-story which I beta-read earlier this year and loved so much! It has all the snark and Britishness and action and it’s fabulous! 😀 Definitely a favorite! I’M […]