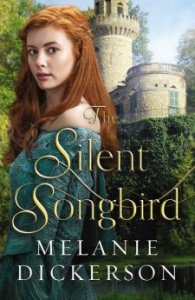 Evangeline is gifted with a heavenly voice, but she is trapped in a sinister betrothal—until she embarks on a daring escape and meets brave Westley le Wyse. Can he help her discover the freedom to sing again?

Desperate to flee a political marriage to her cousin King Richard II’s closest advisor, Lord Shiveley—a man twice her age with shadowy motives—Evangeline runs away and joins a small band of servants journeying back to Glynval, their home village.

Pretending to be mute, she gets to know Westley le Wyse, their handsome young leader, who is intrigued by the beautiful servant girl. But when the truth comes out, it may shatter any hope that love could grow between them.

More than Evangeline’s future is at stake as she finds herself entangled in a web of intrigue that threatens England’s monarchy. Should she give herself up to protect the only person who cares about her? If she does, who will save the king from a plot to steal his throne?

Links — find The Silent Songbird on:

Evangeline, a young woman with a beautiful voice (and the ward of King Richard), is kept in a castle but longs to go out into the world. She finds her chance when she must escape marriage to a horrible man, and meets a caring young man named Westley le Wyse. Deception, scheming villains, and misunderstandings all stand in her way, as she tries to escape her fate and find love and a deeper faith in God.

I was curious how a retelling of The Little Mermaid would work with no magic and not even a mermaid, but it worked wonderfully in this book! It was so fun to pick out the references and see how the retelling wove through the story in surprising yet fitting ways.

The plot was so interesting and really kept me on my toes, wondering what would happen next and how it would all work out. It had a lot going on, was exciting and sweet by turns, and kept me totally absorbed in the lives of these characters, who felt so real. I loved them!

Evangeline was a good heroine, who I quite liked. Westley was the best—endearing, noble, kind, with a sense of humor, though also conflicted about a lot of things going on, and quite energetic which for some reason was really cool. I liked him a lot. I also love their names! (Speaking of the name Westley… I couldn’t help grinning when Eva told Westley “as you wish” once. I loved that! :D)

The romance was so sweet and beautiful—loved it—and the Christian elements were also lovely.

The other characters were great to read about as well: Lord and Lady le Wyse, Westley’s parents—his mother was so nice, and his father was simply awesome. Reeve Folsham, too. He was a gruff character who surprised me by really growing on me. The rest of the characters were all well-written.

The whole book, in fact, was written excellently. And I loved the setting, which I felt so immersed in: the medieval English countryside and castles! So awesome. ❤ I also loved that King Richard was in the story!

The book started out a little predictably (heroine supposed to marry old, ugly, evil man, and determined to escape), so that part sounded somewhat like other books (but I suppose that couldn’t be helped, and it quickly moved on to become surprising and intriguing). Otherwise, I didn’t have any real complaints and I just really enjoyed it. 🙂

I’m aware this is a sort of sequel to The Merchant’s Daughter by the same author, which I’ve not read yet, and I can tell that anyone who read it will love reading this one and seeing references and characters from before. But The Silent Songbird also stands alone, and my lack of familiarity with the first one didn’t take away from my enjoyment of reading this. In fact, it’s made me even more excited to go back and read The Merchant’s Daughter, very soon, to read the story of Westley’s parents! 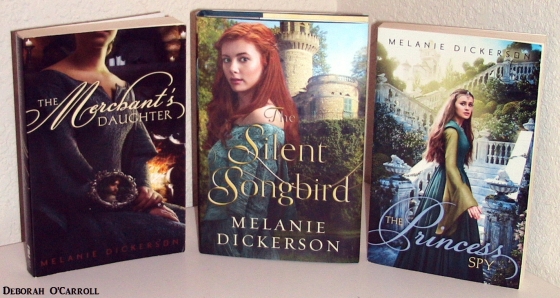 Whether you’re a long-time fan of Melanie Dickerson’s novels, or thinking of trying one for the first time, I highly recommend picking up The Silent Songbird! It’s one of my favorites of her books so far, and I’m eagerly awaiting her next release. 🙂

I received this book free from the publisher through the BookLook Bloggers book review bloggers program. I was not required to write a positive review. The opinions I have expressed are my own.

Retellings, anyone? I know I certainly can’t resist reading them. XD Have you ever read a retelling of The Little Mermaid?

9 thoughts on “The Silent Songbird by Melanie Dickerson (Book Review)”

As the month comes to a close, so does another March Magics, and I had a lovely time celebrating Diana Wynne Jones and Terry Pratchett. ^_^ Thanks, as always, to We Be Reading for hosting! Here’s a recap of my March Magics! Books I Read The Islands of Chaldea (Diana Wynne Jones + Ursula Jones) […]