Today I’m pleased to have, filling in for me, one of the most eccentric but amiable persons in all of Middle-earth, well known for his yellow-boot-wearing tendencies and his joy in all things, prone to singing and talking in rhyme and often referring to himself in the third person.

A Note: Those unhappy individuals in the audience who have only seen the film adaptions of The Lord of the Rings without having ventured through the delightful pages of Tolkien’s actual books, will not have met this character as yet . . . Perhaps this merry meeting will show such people what they are missing!

Hey! Come derry dol! merry dol! My darlings!
Tom’s here to sing today, like the feathered starlings,
To give an award away, that is what they’re tasking
(The SilmAward leaders all) — but who am I, you’re asking?

I’m Tom Bombadil! Quite a merry fellow!
Bright blue my jacket is and my boots are yellow!
Down by the Forest Old, with Goldberry a-living.
The Strangest Character Award is what I will be giving.

Who’s stranger than old Tom? That there is no knowing,
So off to find the voted one, that is where we’re going.
Come now! Hop along! Follow Bombadillo!
Down along the river clear, far from Old Man Willow!

Who’s on the river bank, fishing for his dinner?
Puddleglum of Narnia! Here we have our winner!

(Puddleglum illustrations by Pauline Baynes, from The Silver Chair by C. S. Lewis)

Long legs, pointy hat, hands and feet all froggy,
Thin face and reedy hair, from Eastern Marshes foggy.
Marsh-wiggle, winner-Strange, from near the River Shribble,
Fishing now beside the bank of the old Withywindle!

“Ho there, Puddleglum! Good fortune to have found you!
Tom has some news to give, that in fact he’s bound to!”

“Ahoy! Bombadil. What is it? Was there a fire? Dragons, of course. A flood, maybe? Has my wigwam been knocked down in a storm while I’ve been away? Or perhaps there’s a prohibition against fishing for eels in this river? Bound to be true by now, I shouldn’t wonder. Don’t break it to me gently, I’d rather have it all at once. Put a bold face on it and all that.”

“Not a thing to fret about, but reason for elation
You’ve won a fine award from a celebration!”

“A mistake, I shouldn’t wonder. It must be meant for some other fellow. While we’re on the subject, what might be the nature of this award? Mind you, I don’t believe I’ve won it . . .” 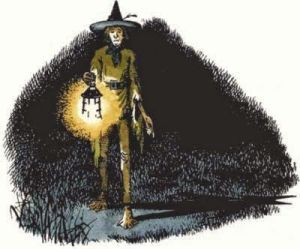 “The Silmarillion Awards, for people who’re deserving;
The Strangest Character Award they have for you, reserving!”

“Strangest. Ah. Now isn’t that a fine distinction. Arranged by the other Marsh-wiggles, no doubt. ʻHe’s a strange one, is that Puddleglum,ʼ they would say. ʻAltogether too flighty and full of bounce and high spirits.ʼ Strangest. Of course.”

“Come now, Wiggle-man, be not melancholy!
Being given this award is reason to be jolly!”

“I dare say. And I’m not a man; but you’ve forgotten that, I’ll be bound. All that merry dol-ing has gone to your head, I shouldn’t wonder. Too much merriment. Just think what the other Marsh-wiggles would say.”

Tom is a-laughing now, laughing like a bellows.
“Old friend Puddleglum, you’re the best of fellows!
But Goldberry is coming now, her silver voice a-singing,
Helping Tom with the award, Silmaril a-bringing!” 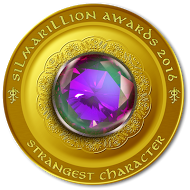 Goldberry (smiling): “Here is a pretty thing for in your wigwam keeping;
Take it please, good Puddleglum, or else there may be weeping,
For it was clearly stated by the fans that it is for you.
You deserve it Puddleglum; take it, we implore you!”

“There’ll certainly be weeping in any case, once they discover it wasn’t meant for me at all. But a chap can’t turn down something like that when it’s given so handsomely from such a fine lady as yourself and from an old friend, even if it is meant for some other poor chap. My thanks.”

“. . . Mind you, I suppose there’ll be a discovery of the mistake, and then there’ll be dangerous journeys for myself or the other fellow, wandering about in snow and rain and thunder, trying to make sure it gets into the hands of the rightful owner. But, to look on the bright side, perhaps such a shiny thing will pay for the funeral of myself and the other chap in case our journeys don’t end favorably (and why would they?). It will be a lot of bother. End in messy deaths for all, I shouldn’t wonder. A sad business. But a Marsh-wiggle never shrinks from hardship. So I’ll accept the award, just this once. I’ll just have to make the best of it . . .”

Puddleglum takes the jewel, then goes back to fishing,
Likely still a hungry one, for his eel-stew wishing.
Goldberry is turning now, laughing bright as any spring;
Puddleglum can still be heard: “Doubt that I’ll catch anything.”

Tom’s laughing, homeward now, through the forest going
With pretty Goldberry, by the river flowing.
The singing is almost done, duty now is finished
Silmaril Awards go on, shining undiminished!

How went the voting? That is what I hear some thinking.
Here are the secrets all! Tom will give them, winking . . .
Marsh-wiggle and sockman, a wizard, girl, and fire —
Strange are the nominees! These votes they did acquire. *

Hoping it was merry though! derry-o! and merry-o!
Characters a-worthy from fantasy and Faerie-o!
Come now, hop along, quick as you are able
To see those voted best in fantasy and fable!

If ever you are wandering down by the Withywindle,
Come visit Bombadil, candle-light to kindle!
Farewell to readers and to Marsh-wiggle by water
From Tom Bombadil and the River-daughter!

(Bombadil & Goldberry, illustration by Pauline Baynes in The Adventures of Tom Bombadil by J.R.R. Tolkien)

56 thoughts on “Presenting the Winner of the Strangest Character Silmaril Award!”

February #readingwrapup! (Swipe for Kindle close-up.)
My (hopeful) TBR for #MarchMagics celebrating Diana Wynne Jones and Terry Pratchett this month!
Happy Writing Anniversary to me! Fourteen years ago today I decided to finish my first novel and be a writer. I love celebrating random dates like that. 😂
If you missed it, these are my top favorite reads of 2020--spine pic this time! Blog post on the subject is still linked in my bio. I just love these books so muuuuch! Look at the pretties!
Happy National Tell a Fairy Tale day! My Snow Queen/Twelve Dancing Princesses urban fantasy short story has a new serial episode up on Wattpad today--link in bio!
Well, that made it to my top-five favorite books of all time! Jayden and Dana are some of my favorite characters EVER.
What's your favorite superhero movie?
My top 14 (ish) favorite books I read in 2020! Guess who finally posted a blog post about this today? February is totally still the right time for a yearly recap, right? 😅
Shoutout to some amazing books I've copyedited (lower shelf) and some of my favorite books on writing (top shelf)!