Good day! Time for another round of Ishness… 🙂

I’ll get to the writing/reading/etc. categories in a little while, but first, I actually had quite a lot going on the “life” front during February, which is odd for me. 😉

The main thing that happened was halfway through the month I injured my back, which has accounted for my trying to be on the computer/internet less since it seems to do better when I’m not doing that. If I’ve been somewhat less active on the interwebs of late, that would be why.

It’s funny how we take things like moving for granted! I’m very thankful now to be able to move. For a couple of days there I could hardly get around at all and hobbled around with a cane and everything — I felt exactly like Sophie from Howl’s Moving Castle, suddenly old! XD (Howl’s Moving Castle makes everything better, including hurt backs and colds. ;)) So if you can move around, remember what a blessing it is, okay? I’m already forgetting and need to try to remember. It’s so good to be able to move! 🙂

It’s been a very interesting experience, and made me slow down and think, which is always a good thing in this hectic life we lead, always dashing about with to-do lists and not stopping to breathe.

But it’s made me realize I need to re-prioritize my life and put health/exercise/looking after myself first. I can’t just live on my computer, apparently, since that’s largely what made me hurt my back. 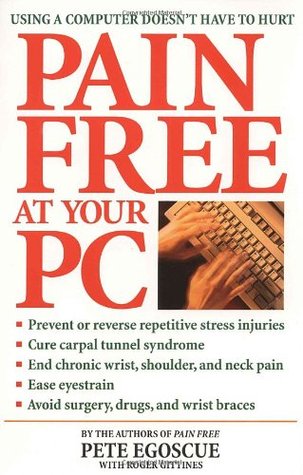 I’ve been reading some books by a fellow named Pete Egoscue, on using certain stretches and exercises to end chronic pain without drugs or surgery and fix the musculoskeletal system. He makes a very compelling case for many of the health problems and chronic pain going on today being due to a sort of alignment dysfunction of the human body brought on by a lack of varied motion, in this “civilized” world that doesn’t require us to move. It may sound odd but it makes a TON of sense.

I’m still reading through them, but I can’t recommend his books highly enough. Pete Egoscue is AMAZING. The exercises in his book Pain Free got me back on my feet quickly, and I only had a couple of days of extreme pain. Between his books and exercises, prayer, and an amazing family looking after me, as well as a good deal of patience (NOT my strong point… it’s been interesting) I’m happy to say I’m nearly normal again. Yay! 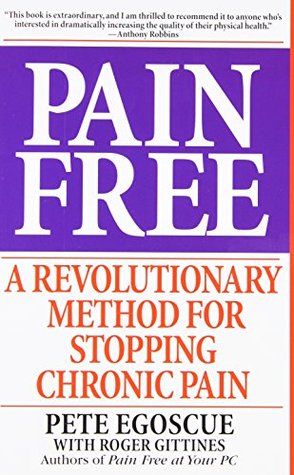 I don’t usually talk about “real”, “important” subjects on my blog, like health and opinions and things, striving usually to just stay on the happy/safe end of the spectrum with things like books and writing and music and movies. But pain is a serious thing, a serious motivator, and I’m quite blown away by Pete Egoscue’s books and simply had to tell the world about them. I’m still doing the exercises for my back, but hope to eventually move on to ones that are supposed to “fix” the structural alignment and help provide a life of motion to prevent future injuries/chronic pain of this kind.

It’s going to be a journey, and one that I know many people (including myself) feel they don’t have time for. But I don’t have time to stop my life for a week due to pain, either. I may say more on this in the future, but in the meantime, I highly recommend his books Pain Free (which I haven’t finished reading), and Pain Free at Your PC (which I read in its entirety since, after all, for a couple days there I couldn’t do much besides lie in bed and read… my back was helpful like that. ;)).

But it wasn’t all bad, this month of February! I also managed to do some fun things, even after the whole back fiasco, which I’m super thankful for being better enough to do.

For one thing, I made it to a library booksale, which is always fun, and found a smallish stack of books.

And I had the chance to go to a writer’s workshop held by Christian YA Fantasy/Thriller author Jamie Foley, speaking on writing, self-publishing, marketing, etc. It was extremely fascinating and Jamie herself was super sweet, funny, and informative.

I was supposed to get back into writing during February, after my month off from writing in January… But this month arrived and I realized I had no idea where to START. I was trying to decide what story to work on and consequently got hardly anything done, just editing a couple chapters of The Secret of Kedran’s Wood…

Then with the whole back thing and suddenly spending a bare minimum of time on the computer, writing just suddenly wasn’t a priority anymore, and I gave myself permission to relax on that front as well.

With the consequence that, since computer time was precious, I actually got around to starting The Other Half of Everything! I’ve written snippets before (over 6K words of them…) but hadn’t officially “started” it with an opening and everything. So I did that. Which is most exciting! Even if it was only 400 words, at least I “started” it! ^_^

But what with everything else going on, a couple of edited chapters and a page of OHE is something to be proud of, so I’m pretty happy with the pitifully small amount of writing I got done in February. 😛

The last day of February (I told you it was for leaping!) I was interviewed by Heidi Peterson! Some fascinating questions there that I had a ton of fun answering — check it out if you haven’t. 🙂

I read 12 books in February… quite an odd bunch, as you can see!

I was thrilled to find the Jackaby books at my library, and read them both, plus the free Kindle novella, all in a week… I’m rather addicted, and very excited about the next book, coming in August — which just had the cover revealed! *flails*

Also, can I take a moment to say: R. F. Jackaby himself TALKED TO ME ON TWITTER. *dies of fangirl feels overload* (Yes, he’s on Twitter. Yes, this is the coolest thing I’ve heard in a long time.)

It was the best thing EVER.

I also took part in the Fantasy Love February Reading Challenge held by Grace Mullins @ Fictionally (and she just won a place in the Five Magic Spindles collection! Yay! :)) so it was fun to read some more fantasy for a change, even if I didn’t get to everything I planned to read.

And, as I mentioned, Pain Free at Your PC by Pete Egoscue, which is amazing.

I should have another Reading Roundup over on my book blog soonish, talking about all the books… Speaking of which…

ON MY BOOK BLOG IN FEBRUARY

“Blessings” by Laura Story. (And, to be honest, still Tell Your Heart to Beat Again by Danny Gokey. What can I say. The obsession runs deep. I adore it. <3) Both have been apt for this chapter in my life. Sometimes life has clouds and it’s hard to keep going when it’s hard to remember that there are sunbeams… somewhere…

(There were also large amounts of Silly Wizard music consumed and re-consumed on Youtube, but that’s not unusual…) Occasional episodes of Jeeves & Wooster, since I found a few at the library sale. So much fun! (I still love P.G. Wodehouse’s books better, but the episodes are quite different and still hilarious, in a different sort of way.) Bertie and Jeeves are a great pair and their actors are just perfectly hilarious together.

I haven’t had this category before, and I don’t know how good I’ll be at keeping up with it in the future, but here are a few things that went on or are going on around the internet recently or soonish.

I… don’t really know what my March plans are. Aside from a few books to read for beta or review, which looks to keep me busy, nothing else is set in stone… I hope to do some writing of some kind, but we’ll see what happens. I’d love to read some Diana Wynne Jones books but might be too busy… I may try to keep my computer time down, and I’ll be trying to figure out a new outlook on life involving exercise and actually taking care of myself — novel concept, right? 😉

How was your February and what are your March plans? 🙂 I’ll just leave you with this. XD