I was tagged again — twice! — for the 7-7-7 Challenge, this time by Kelsey Bryant, and by Shantelle Mary Hannu. Thanks so much, guys! ❤ And everyone, check out their loverly blogs, do!

There seem to be slight variations on the rules, but basically you go to page 7 of your current WIP (Work In Progress), and select 7 lines of your story as a snippet to share on your blog (some say at the top, some randomly selected, some say the 7 lines should be 7 lines down…). And then tag 7 other writers! Simple enough. (Even I should be able to figure this one out… *coughcough*)

I finished my short story Darkling Reflections, so it’s no longer a Work In Progress, but here are seven lines, seven lines down, on page seven, from it anyway! 😉 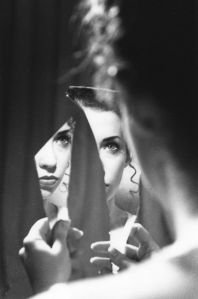 The lawyer—her father’s and now hers, just as everything else was—stood by a side table and waved her over as she approached.

He looked exactly like a lawyer ought to. Distinguished, steel-grey, crisp, businesslike, and very tidy. He appeared pleased to see her and smiled a little.

Even his smile was tidy.

“Ah, Alethea. I did not think you were coming.”

I’ve already done the 777 Challenge for my main current WIP, The Secret of Kedran’s Wood… So, instead, here are seven lines from it that I wrote recently.

That night, Tare went to the warehouse.

The winding way down the dark alleys beneath the cold starry sky was familiar, though he had not walked it since . . . well, since that fateful night the previous summer. After that, there had been no need to.

Ignoring the cold wind that wrapped round him and stabbed down his collar, he padded with silent purpose through the shadowy darkness until he reached the door of the warehouse.

It was locked, as the Chess Club had said. But that did not stop him.

Pockets and fights were not the only things Tare could pick.

I got to meet @ebdawsonwriting on a roadtrip recently! 😱😍
📖Do you collect anything?📖 I'm excited to rep this journal and lip balm for @shepherdssongcreations! 😍
I'm back from hiatus! Where are my audiobook fans at?
What's a book/series you get an itch to read when fall hits? The Dalemark series is one for me!
Sale heads-up! This steampunk fantasy novella collection by one of my fave authors is 99 cents on Kindle through Oct. 14! Link in my bio.
Happy release day to Cranberry Bog Crumble by @sparrow_lina! 🎉 These books always make me so hungry when I copyedit them--so much magical food! Scrumptious pies, delicious fall vibes, and fae!
I'm excited to help share the #CoverReveal for THE WINDWARD KING by @ktivanrest -- releasing October 29! (Preorder link in my bio!)
New theme! Happy fall! Happy Hobbit Day!
Callette thinks she's the world's next famous author and she stole my seat. 😂