I received an e-copy of this book from the author in return from my honest review; I was not required to be positive; these opinions are entirely my own.

As the sequel to BROKEN GLASS (found in the FIVE GLASS SLIPPERS anthology), I was so excited to read CORRODED THORNS to experience the rest of Darcy’s story! And boy does it ever not disappoint!

I loved this book so much that I read it twice in one week. I have an occasional urge to do that with other books, but almost never follow through. But this time I just couldn’t help myself! Fortunately it’s a novella so I was able to read it in a sitting, and it’s one of those perfect novellas that feels exactly the right size.

As a Beauty and the Beast retelling, I so enjoyed watching the plot unfold and picking out the similarities and twists. It’s a favorite fairytale of mine, particularly that it shows how even really horrid characters can find redemption. I LOVE fairytale retellings, and this has to be one of my favorite versions of Beauty and the Beast! I simply adored it.

The plot behind the normal Beauty and the Beast part of the story was so awesome — I loved that there was so much more going on under the surface than meets the eye and it TOTALLY made sense for the story; plus, fascinating fairy godmother politics! Isn’t that just cool? It was all so interesting to read about!

It was a gorgeous world, the settings felt so alive and real and everything was extremely vivid in my mind, despite the relative shortness of the tale. I really felt like I was in that old dark castle on the lake! The touch of steampunkness was SO cool and original (steampunk Beauty and the Beast? Yes please!), and I don’t usually notice this but I LOVED the magic in this story! It was just… I can’t describe it but it was perfect and seamless and interesting. Just… really well done.

In the interests of being fair and looking at both sides… Complaints? Umm, it took me a moment to think of any. There’s hardly anything wrong with this book! I did sometimes have a hard time visualizing exactly what the Beast looked like. I wished there had been a little more description on that, since my mental image kept changing. That being said, it was still an extremely awesome idea the way he was done!

At first as I started out, I was slightly disappointed that it didn’t feel just like the first one, BROKEN GLASS, which was hilarious and mad-dash and there were so many characters running around making a mess and being fabulous. But that’s only a partial complaint, because I quickly grew to love CORRODED THORNS just as much, despite its different feeling, and perhaps more because this one was much more straightforward of a plot, mostly following the one storyline, so I ended up more invested and just loved watching Darcy and Madeline’s story unfolding!

So don’t expect CORRODED THORNS to have exactly the same feel as BROKEN GLASS. This one is a little less whimsical and has a darker, more serious and epic feel to it (but there are still fabulous characters and some hilarious parts, never fear!). But I ended up loving that about it. They’re just different stories but you can still feel that they’re connected as well.

And now we get to the best part. The characters! I LOVED THEM.

Darcy, Niles, and Madeline make for a splendid main cast. Their interactions are just the best! The humor, the gems of hilarious lines… I loved it all! The other characters were interesting as well. Basically look forward to a great cast of characters in this book.

The ending. THE ENDING! There was one of those moments near the end where I suddenly stopped reading and went oh no — it’s about to be over — I don’t want it to END!! But then it stayed just the right extra amount of time to wrap up the things I wanted addressed and it felt… I don’t know… like a reward and it was just PERFECT! AAAHH. I loved it so much! Also, the glimpse of some characters from the first at the end totally made the book!! It made me so very very happy!

And not to give anything away, but this book contains my favorite proposal scene EVER. Yes, it was that good. ❤

Gaahh, how can I say enough wonderful things about this wonderful book? I feel like I’m falling woefully short! For such a small tale, it was packed to bursting with fabulousness. There was much incoherent squealing and babbling about its awesomeness on my part after finishing it. EEEK! ❤ And then I had to reread it only a few days later because I couldn’t help myself — I had to enjoy its loveliness again!

Basically it was glorious, epic, funny and full of characters I loved a ton, plus a setting I was completely immersed in (I want to live there!), and of course Beauty and the Beast! What more can you want?

I adore it and love it to bits and it just made me indescribably happy!

A fairy godmother—in prison? Madeline can’t remember even being a fairy godmother, let alone doing something bad enough to land her in a cell. When a mysterious lady sends her back to her old village with cryptic instructions and no answers to her many questions, Madeline must find a way to free her father, who has been imprisoned in a tower by a terrible beast.

First banished by his father the king, then cursed by an angry fairy, Prince Darcy will do anything to escape this fate and achieve revenge and power. Just when he thinks his chance has arrived, by some cruel trick of fate a girl from his past returns and once again wreaks havoc on his life. Worse still, he begins to question what he truly desires. 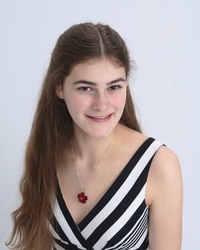 Emma Clifton has been thinking up stories before she knew how to type them out. Reading books such as the Chronicles of Narnia, The Door Within Trilogy, and Redwall inspired her to take her writing more seriously. Though her rigorous homeschool education keeps her busy, she also enjoys sewing, reading, and spending time with her family in beautiful Northern Virginia.

To find out more about Emma and her work, visit:

(You can also find her on Goodreads.)