Today I’m linking up with Sky @Further Up and Further In, and Cait @ Paper Fury (formerly Notebook Sisters) to participate in their lovely interview thingy, Beautiful People!

I did a post for Beautiful Books back in November, but I’ve yet to do an actual Beautiful People post for interviewing characters.

…And it would seem I still won’t have done that, since this month is an Author Edition!

Which means it’s interviewing me instead of my characters.

I know. What a disappointment.

Still… on with the show, shall we?

1. How many years have you been writing? When did you officially consider yourself a ‘writer’?

I’ve been writing stories for 12-ish years (yes, I was young!) but I officially decided to be a writer nearly 8 years ago. I did a post about that beginning — I decided I was going to finish my first book and go on to be a writer… And here I am.

2. How/why did you start writing?

I’ve always been, really. Nearly as long as I can remember. There was no specific how/why. It’s a thing that happened once I could use a pencil. And then a computer. It’s just… me. I assume it’s because I read so much (and started reading so early) and was homeschooled and always had stories going on in my head.

3. What’s your favorite part of writing?

I DON’T EVEN KNOW. Maybe when I’m deep in the midst of writing a first draft and am totally in the zone and don’t notice anything else (rare). Or, more likely, the “discovery” moments of my plotting, when I find out how something fits together or suddenly “see” something new for the story. I don’t understand writers who talk about “creating” or “making up” their stories. I discover mine. It’s like they’re already there, on the Tree of Tales (as Tolkien would say), and I just happen to catch glimpses of the leaves and then write down the story that was already there. (Naturally, there’s SOME element of creativity and tweaking and putting everything together. But it feels like discovering, not making up.)

Finishing things. It’s so hard to actually FINISH a book. (Well, that and sitting down to write, sometimes…) I have a million ideas, and I’ve started copious stories, and gotten fairly far into several of those, but… they just don’t finish. I usually get distracted by another shiny idea, or just… lose focus.

5. Do you write best at night or day?

At night. I’m afraid I’m a bit of a night owl… despite my attempts to get on a better schedule. My writerly brain just seems to get working more at night, and some of my best scenes are brainstormed and/or written at 2 a.m.

6. What does your writing space look like? (Feel free to show us pictures!)

I posted a picture of my writing area/desk once in this post… (It still looks like that, just not as tidy…) But actually, although I do work at my desk a lot, I might do my actual writing more often while sitting in my big comfy chair where I read. 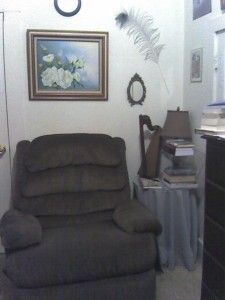 a cozy place to read or type

7. How long does it typically take you to write a complete draft?

There’s not really a typically… 18 months. 28 days. Just shy of a year. Those are the stats so far. (Yes, the 28 days was a NaNo; the 18 months was my first; the year-long, I was working on other stuff too.) Of course, that’s novels. I tend to write short stories in a day. *innocent grin*

8. How many projects do you work on at once?

Haaaaaaaaaaaaahahahahaha. *falls on floor laughing* …Ahem. Well. I have so many stories flying around in my brain… I guess I’m usually actively working on at least a couple, but I can’t be too active on more than four-ish… Usually there’s one or two that are most prominently being written, but there’s always plotting and snippets from several others going on.

9. Do you prefer writing happy endings, sad ones, or somewhere in between?

HAPPY. HAPPY. Do not give me tragedy; and only bittersweet under verrry special cases, people. I like my happily ever afters! And hope. And good things like that. Reading sad endings often makes me want to throw things. Like the book. At the author. Ahem.

Lloyd Alexander–probably the most. George MacDonald and C.S. Lewis. (They were the three who started me writing fantasy.) J.R.R. Tolkien, naturally. And Eleanor Cameron. And probably Mirriam Neal.

11. Do you let people read your writing? Why or why not?

Um …yessss? Sometimes. My sister always gets to see my latest writing, because she loves my stories and/or because I languish away without feedback. But I’m often nervous about sharing my writing with people besides her. WHAT WILL THESE PEOPLE DO WITH THE WORDS OF MY SOUL? *cowers behind a tapestry* But, on the other hand, I do sort of love it a ton when people read my things. Because when they like them and actually remember to reply/send feedback, there’s no feeling like it in the world. ^_^

Getting all my story ideas written the way I want them to be. (Yeah. Probably not going to happen…) Being published in some dream-mix of all the benefits of Traditional-, Self- and Small Press-publishing would not go amiss either. And I naturally wouldn’t object to becoming fabulously rich. (No fame, though, please. I’m an introvert.)

But to be honest, I’ll settle for actually finishing the stories I’m writing right now, and getting to some of my special projects, sometime in the next few years, WITHOUT going crazy.

My goodness. What a question. WHAT ELSE IS THERE? Um. Probably draw beautifully. Or be verrrrry musically talented! …Or both. (I’d still like to!)

14. Do you have a book you’d like to write one day but don’t feel you’re ready to attempt it yet?

Yes. Six specific ones, in fact. 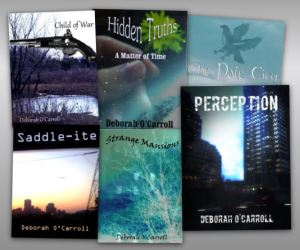 Basically the ones with deep themes or difficult content. These are the stories that I not only have to be a better writer for, but need to be older. I don’t want to attempt them till I’m ready because I don’t want to mess them up. (And goodness knows I have enough to keep me writing for years in the meantime.)

For all you young authors who tackle big stuff in your books right away — good for you. But I’m not going to try doing certain things till I know it’s the right time for me to try.

15. Which story has your heart and won’t let go?

Well, all of them in their way, naturally.

But lately, my contemporary-fantasy Kedran’s Wood series — that was recent, sudden, and I was not expecting it to get my heart like that!

But it used to be (and is still in the background, waiting…) my epic fantasy series, the Starrellian Saga. They were my original stories, and they’ll always be nearest and dearest my heart in their way. Because while the characters of Kedran’s Wood may have become some of my very best friends… Starrellia is my HOME. My original, old home that I discovered first in my writing. I’m letting that series simmer quietly on the back burner while I finish some other things. But I look forward to the time when I can return to it, and give it my full attention again . . . 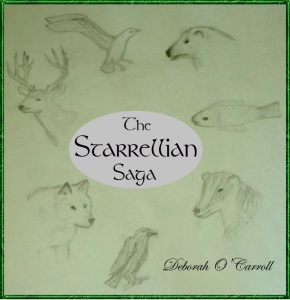