Today I’m joining in the cover reveal for the third book in Kendra E. Ardnek’s Bookania Quests series: My Kingdom For a Quest!

But first, Kendra joins us to answer some questions about the books and writing…

Your Bookania Quests series seems to be basically a big glorious fairytale-and-legend retelling mashup… How much of a part would you say the Arthurian legend plays in this book, and what other tidbits of stories come into play the most?

Yeah, big glorious mashup. That’s Bookania. I haven’t even gotten to the books that involve Shakespeare and Mary Poppins.

Arthurian Legend is pretty much the focus of My Kingdom for a Quest, the main POV is Arthur himself, and most of the characters are there to play some role or another in the legend. However, I have taken more liberty with Arthur than I have any other fairy tale or legend to date (the exception being, perhaps, Puss in Boots).

The other fairy tale that is important is Sleeping Beauty. Most of the characters who aren’t directly connected to Arthurian legend are part of that tale, and some have a foot in both stories.

What advice would you give writers interested in trying to re-imagine and twist old stories in new ways? (i.e.: what challenges have you faced and overcome in writing these books?)

I have guest posted on this topic twice, so I do have quite a bit of advice.

However, I think the most important part is to make the Fairy Tale yours. Sure, a thousand people have told this story before you a thousand different ways, but the moment you decide to set about retelling a fairy tale, you make it yours. Own it.

How many books do you have planned for this series?

I have a notebook with 21 titles written in it, and I have half a dozen vague plots and bits of history planned beyond that. Not only that, I have three or four full-length prequels planned and dozens of short stories that take place within and around the series. So, yes, this is a world that will keep me busy for quite some time to come.

Aaand, here at last we have the cover that has been waited for! 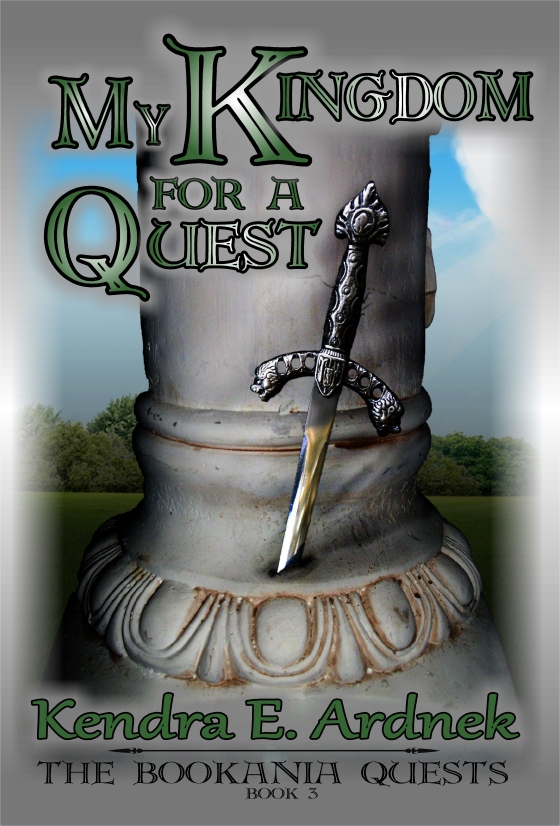 Arthur is the rightful king of Briton, but his Uncle Mordreth refuses to give up the regency. Arthur and Grandfather are now returning with allies to wrestle the kingdom from his uncle’s grasp.  But not all is as it seems among his allies, and everyone has secrets.  New loves, old loves, lost loves, kingdoms conquered and kingdoms stolen. Who is the real “rightful heir” and will the nearly forgotten sword in the stone finally answer this question?

Find My Kingdom For a Quest on Goodreads here!

I don’t know about you, but I love a good Arthurian and/or fairytale retelling… I’m very much looking forward to visiting Bookania myself in Kendra’s series!

In the meantime, you can read the first two books in the series (as I plan to)!

Kendra E. Ardnek loves fairy tales and twisting them in new and exciting ways.  She’s been practicing her skills on her dozen plus cousins and siblings for years, “Finish your story, Kendra”, is frequently heard at family gatherings. Her sole life goal has always been to grow up and be an author of fantasy and children’s tales that also glorify God and his Word. You can read more about her on her blog, knittedbygodsplan.blogspot.com.

Belated June #bookhaul! This is like ancient history at this point but anyway. 😂 Look at the pretties! 😍
Belated June reading wrapup!
Shoutout to Silverblood by @jamiesfoley which released this month! 😍 I love Jamie's books and I'm super excited to read this sequel to Emberhawk!
🎉 3 Year Instaversary + Giveaway! 🎉
I'm back from vacation! I had a lovely 4th of July week and now I'm back to do some Instagram posting again, hopefully!
This lovely little book wanted a sunflower photoshoot so we did. There is sooort of a character who is the sun (such a marvelous character, too) and it seems like a perfect summer read, so all in all it felt appropriate. And, I mean, if you don't have golden apples, sunflowers will have to do.
🦊I haven't mentioned this book in 18 whole days so CLEARLY I must do so again!🧜‍♀️
I realized I hadn't posted this book since getting the stunning paperback and these delicious character cards so of course I had to remedy this!
Happy longest day of the year! It's the Summer Solstice: first day of summer these days, traditionally Midsummer Day. Either way, it seemed an appropriate time to post this charming book! 😍