Which should be “A Letter from Camp” because it’s not postcard length. But “Postcard” sounded better.

If I were actually at a real live Camp, here is a letter such as I might send from it.

I brought along Tare and Bremask, planning on working on their stories (The Secret of Kedran’s Wood, and The Invisible Mask). But lo and behold, for the first week, I didn’t write them at all. Instead, a great black griffin from another story of mine happened to fly by, and I got distracted writing about him instead.

Tare and Bremask were naturally put out that, after dragging them all the way out into this wilderness and making them camp outside, I was ignoring them.

Not that they weren’t doing their fare share of ignoring, themselves. They outright refuse to acknowledge each other’s existence. This is actually a good thing, because if they interacted, somebody would probably get hurt.

I had brought along two tents for them, intending to take the cabin myself, but ended up stranded in one of the tents anyway. Bremask, nobleman that he is, breezily commandeered the cabin for himself. His words? “It’s no mansion, but I suppose it will have to do.”

Tare refused the tent I offered him, electing to sleep outside, wrapped in his leather jacket, sitting up in a tree. His words? “There’s no bears up here.” (Since I told him he’d be arrested if he shot any of the bears — which is discouraged at a retreat like this — and the only way for him to keep from killing a bear if it attacks him… is to not let it attack him in the first place.)

So throughout the week, while my two characters sulked and glared and generally were brooding and dark, I would sit in my tent, writing away, and would occasionally go out to talk to the griffin, who in his spare time — i.e.: when he wasn’t hunting — perched on the cabin roof (Bremask ignored that). 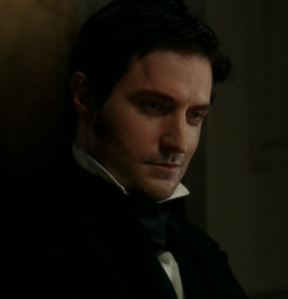 Bremask looking self-satisfied over something, as usual.

The first night, I tried to make s’mores. This was not a success. Neither Bremask nor Tare could see the point of putting the ingredients together, finding them far more interesting on their own. This was nonsense, of course, but they would not be persuaded otherwise.

Bremask ate all the chocolate while I wasn’t looking — apparently it was rich and fine enough for him–and seeing no point in the marshmallows or crackers, or the company of Tare and myself, left the campfire circle because he was no longer interested.

What Tare is doing to me right now.

Tare skewered most of the marshmallows on a long stick and roasted them at the same time. I told him part of the point was to do them one by one, but he apparently thinks his way is more efficient. This, of course, left me with nothing but the graham crackers, which were bland anyway, so I ended up feeding them to the griffin.

As for singing campfire songs… well, let’s just say that didn’t go over well. These unsociable dark-past brooding types aren’t the sort to randomly burst into song, and furthermore do not appreciate when others do. 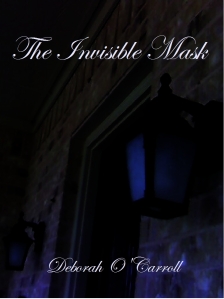 Finally, at the end of Week 1, I finished the griffin’s chapter, and moved on to writing The Invisible Mask. Bremask was pleased (as pleased as he’ll let on to be, anyway).

Tare, on the other hand, was annoyed at me for not writing him, but I told him I couldn’t write about him because I didn’t have the rest of The Secret of Kedran’s Wood plotted, and wasn’t going to work on such a massive plotting project during Camp. So Tare waited, biding his time, while I wrote about Bremask.

Then I finished the scene where Bremask left (in the story, that is; he’s still grandly occupying the cabin in case I need him again).

At that point, Tare, knowing I was susceptible to lack-of-awesome-character-itis, coolly stepped out of the shadows and handed me some key plot points of his second book that I’d been unaware of.

The consequence was that for the next couple days I forgot it was Camp, dropped my writing, and madly plotted away, trying to fit all the puzzle pieces together. Effectively letting Tare take over my life for over 48 hours.

(Tare, stop being smug. Stop it. And don’t look over my shoulder while I’m writing a letter to my friends. It’s not polite.)

I still haven’t started writing him again, and he’s not pleased with me about that — or about the fact that the one scene I have written in his story featured the laid-back-blond-haired-golden-retriever-type-fellow Adrian, the closest thing Tare has to a rival…

This brings us to the end of the second week of Camp NaNo, and I’m at 8,000 words, just 2K short of reaching my official goal. So aside from character problems, things have been going quite well around here! I fully intend to keep writing after hitting my goal, as long as there’s scenes that still want writing. Perhaps Tare will even get written, who knows?

I’ll be posting an interview with Tare himself next week. If you have any questions for him, leave them in the comments or drop me an email! 🙂 I can ask him the questions during late nights around the campfire when I’m not writing… That will teach him to act like he wants attention. Ha. (He hates being interviewed, but *I* quite enjoy it!)

Meantime, I’d better give this letter to the carrier pigeon who’s waiting impatiently for it — I think he wants to be well underway before it starts raining. So I shall pass it on and go back into my tent, to write away in my notebook to the sounds of rain pattering on the tent-roof and — if they’ll start acknowledging each other’s existence — my characters arguing…

And of course, if any random plot bunnies happen to hop on by, I’ll have to let them inside to join me, because I just couldn’t leave them out in the rain . . .

I’m so excited to share TWO cover reveals with you guys today! So excited for both of these! COVER REVEAL #1 Firstly, we have a futuristic London buddy-story which I beta-read earlier this year and loved so much! It has all the snark and Britishness and action and it’s fabulous! 😀 Definitely a favorite! I’M […]