Greetings, earthlings! (And… non-earthlings welcome too I suppose, if there happen to be any around…)

I return from my unannounced blog hiatus! *trumpet fanfare*

Camp NaNo wore me out and I had several life things to catch up on, so my poor bloggy fell silent… But now I’m back, and haven’t done an update on general stuff, so I think I will do that!

Blog: You may notice I’ve been doing a bit of tweaking to the blog… I updated some stuff in the side bar and stuff and updated the about and story pages and so on, so look around if you like. 🙂 I’ve also *ahem* been having a ton of fun making new graphics…

Playing with Pictures: The updated header etc. is due to my latest online obsession: Pixlr. A good friend told me about it some time ago and ever since I’ve been addicted to it. I’ve never done much more than very simple photo things because it’s never been important enough to me to bother buying something like photoshop. But this is free and easy to use and I must say I’ve been enjoying it immensely! Especially making book covers… So much fun!

Camp NaNo: I won! 10 thousand words in a month may sound low to most of y’all prolific writers out there (who I admire greatly from a distance) but I hadn’t done much writing at all this year until now so I was very pleased to make some headway on a some stories. I got nearly a chapter of The Invisible Mask done, and got well on my way into Snowfall at Kedran’s Wood, which I’m super excited about! I think I’ll probably write another scene or two and then take a break to try to figure out the crazy plot that’s all over the place and needs to be sorted before I go much further… 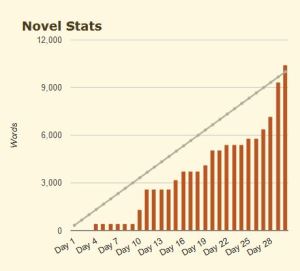 Other than that, I’ve been doing miscellaneous other things including:

I have a few blog post ideas simmering in the back of my brain, including a long forgotten batch of Liebster award answers that I need to get to, and some general thoughts on writerly things that various blog posts have gotten me thinking about.

So hopefully you shall hear from me again, and soonish!

In the meantime, I’ll try to get back to doing writerly things. But I’m afraid that when all’s said and done, especially as far as sticking with one story and then getting distracted by a shiny new idea… this is me: