(I’m always a couple centuries behind on this sort of thing that goes around the interwebs, but here I am anyway…)

The lovely Lauriloth of Musings of an Elf awarded me the Sunflower Award — thank you Lauri! You’re the best!!

For the record, she has one of the most AWESOME blogs in the blogosphere, so be sure to check it out and follow her! 🙂

1. I’m horrible at coming up with random facts about me. (Oh wait, that’s a fact!)

2. I love to knit but have never progressed further than making bags, scarves, and other square-ish things.

3. I should be writing my Camp NaNo novel right now. (But this is funner!)

4. I love to take walks but I rarely remember to actually get out.

5. My favorite fruits are strawberries and apricots. Yum.

6. Cover anything with chocolate and I will eat it. (Pretty much…)

8. I have 58 stories on my list of “official stories written/currently-writing/to-write”. (This shows how crazy I am.)

9. I love talking in parentheses. (As can be seen above…)

1. Would you rather have the ability to fly, turn invisible, or have perfectly clean teeth where you never have to brush them again? (Of course I’m serious.)

This is actually way harder than I thought it would be. The teeth one is the most practical, of course. Being invisible would be really handy for writer inspiration… think of all the places I could go and the people I could hear talking! *mischievous grin* I might have to go with flying though, especially because I think it would feel weird to be invisible. (Though I wouldn’t want anyone to SEE me flying… that would be awkward. Especially if I had wings. I guess the real answer is to fly invisibly. ;))

2. Do you have a water buffalo?

Yes. *pauses to absorb weird looks from audience* . . . Okay, not really. But I’m part of an online group where each member receives among other things a virtual pet water buffalo. Mine is named Frazzle because he stood in an electric storm when I got him…

3. Do you have a pet of any kind? (Siblings count. Juuust kidding! ;P)

I have a cat named Callette, named after a griffin in “Dark Lord of Derkholm” by Diana Wynne Jones. My cat Callette is the sweetest most adorable thing ever, except when she’s sneaking into my room when she isn’t allowed. She also steals the sunbeams to keep herself eternally youthful and beautiful. *nods seriously* 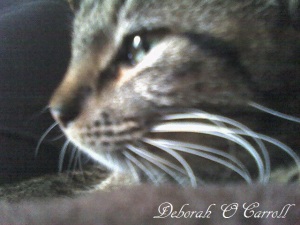 4. What advice would you give to that poor old woman who lives in a shoe?

Stay calm? Um… Try to enjoy those little ones before they grow up. It’ll happen. (I think… Though since it’s a nursery rhyme, maybe they’re eternally young? Fun fact: I’d never read a “retelling” of the old woman in the shoe until reading The Magician’s Boy by Susan Cooper last week. It was a very fun book.)

Not evil at all! Unless you’re counting melodies and music from soundtracks, in which case I’d be entirely doomed (too many favorites there!). My favorite song though is definitely “Never-Ending Road” by Loreena McKennitt.

6. If you had to change your first name, what would you choose?

Now THIS question is evil! Ack. Can I answer “all of them”? It really depends on which particular cake, pie, ice cream or cookie we’re talking about… Probably ice-cream, if it was really creamy and either chocolate or strawberry… If it was winter though, I’d probably go with something not so cold. (Yes, I think this through.)

8. What are three simple little things in life that make you happy?

Curling up in a sunbeam for a nap with Callette sitting on top of me. Listening to beautiful Celtic music. Disappearing into a really good book for hours on end, forgetting about everything else.

9. Do you have a bucket list? If so, what are your top three things on it?

I actually don’t have a bucket list… I should make one! So on my non-existent bucket-list my top three items are: 1: make a bucket list. 2: finish writing a novel in the next year. 3: read all the retellings of Twelve Dancing Princesses that there are in the world (this might not be feasible… but bucket lists don’t always have to be, I think? *is not an expert on bucket lists*).

The Twelve Dancing Princesses! (see above…)

11. Who’s your favorite fictional villain? (It can be from a book, show, movie, or whatever.)

This is REALLY hard. I’m not sure. Do villains who aren’t entirely villainous count? If so, maybe Guy of Gisborn in the BBC Robin Hood. Or villains that I wish weren’t villains? Then probably a certain person in the book “Entwined“. *cough* Or villains that are the scariest ever? In that case, probably Darth Maul from the first Star Wars movie, or Colonel Tavington from the film “The Patriot”. Or I could just pick Loki for most of those reasons…

11 Questions for the Nominees:

1. What’s the last sentence you wrote in a story?

2. What was the last movie you watched?

3. Do you have a favorite quote?

5. Have you ever seen a shooting star?

6. If you were stranded on a desert island and could only have three books, which would you bring?

7. In real life, which appeals to you more: futuristic, modern, or old-fashioned?

8. In fiction, which appeals to you more: futuristic, modern, or old-fashioned? (Other worlds count.)

9. What’s the strangest thing hanging on your wall in your room?

I tag these wonderful ladies. Their blogs are amazing, so be sure to check them out as well!!

Obviously you don’t have to do it if you don’t want/don’t have time, but I’d love to see your answers! 🙂 (Alternately, give the questions to one of your characters and have them answer on your blog.)

This was so fun! Thanks again, Lauri! ❤